The History of the Field Spaniel

A medium-sized dog breed of spaniel type, they were originally developed to be all-black show dogs in the late 19th and early 20th centuries and were unpopular for work as a hunting dog.  However, during the mid-20th century they were redeveloped as a longer-legged dog that was more suitable to be used for field work.

One of the handsomest and possibly most noble looking of all the Spaniel varieties, the Field Spaniel has had a chequered career since the breed evolved some 150 years ago.  Throughout the 1900’s, the Field Spaniel had some ups and downs, but these were mostly downs until a rally began in the late 1960’s. Luckily there were a few dedicated breeders in England that had saved the breed from extinction. In America, registrations of the breed had slowed enormously through the teens and only a few were registered from the late 1920’s thru 1941. There weren’t any in the AKC studbooks from 1942 until Dick Squier and Carl Tuttle brought in their imports in 1967 and started the revival of the breed in America. They can be seen in the photo below taken at the ASC Flushing Show in 1968.  Numbers have increased considerably in the past ten years; as they have become better known, so has the popularity of the Field Spaniel increased. All of today’s Field Spaniels can be traced back in lineage to 4 dogs from the 50’s-60’s era: Elmbury Morwenna of Rhiwlas, Columbina of Teffont, Ronayne Regal and Gormac Teal.  This foundation stock produced 2 famous litters (the A and the J), both credited to Mrs. A. M. Jones MBE of “Mittina” prefix in England. 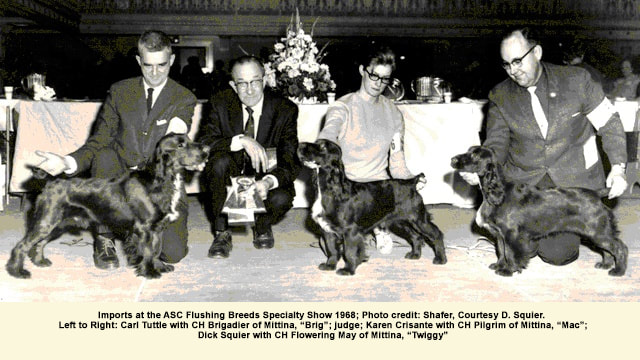 Official Standard of the Field Spaniel
General Appearance: The Field Spaniel is a combination of beauty and utility. It is a well
balanced, substantial hunter-companion of medium size, built for activity and endurance in a heavy cover and water. It has a noble carriage; a proud but docile attitude; is sound and free moving. Symmetry, gait, attitude and purpose are more important than any one part.
Size, Proportion, Substance: Balance between these three components is essential. Size-Ideal height for mature adults at the withers is 18 inches for dogs and 17 inches for bitches. A one inch deviation either way is acceptable. Proportion-A well balanced dog, somewhat longer than tall. The ratio of length to height is approximately 7:6. (Length is measured on a level from the foremost point of the shoulder to the rearmost point of the buttocks.) Substance-Solidly built, with moderate bone, and firm smooth muscles.
Head: Conveys the impression of high breeding, character and nobility, and must be in proportion to the size of the dog. Expression-Grave, gentle and intelligent. Eyes-Almond in shape, open and of medium size; set moderately wide and deep. Color: dark hazel to dark brown. The lids are tight and show no haw; rims comparable to nose in color. Ears-Moderately long (reaching the end of the muzzle) and wide. Set on slightly below eye level: pendulous, hanging close to the head; rolled and well feathered. Leather is moderately heavy, supple, and rounded at the tip. Skull-The crown is slightly wider at the back than at the brow and lightly arched laterally; sides and cheeks are straight and clean. The occiput is distinct and rounded. Brows are slightly raised. The stop is moderate, but well defined by the brows. The face is chiseled beneath the eyes. Muzzle-Strong, long and lean, neither snipy nor squarely cut. The nasal bone is straight and slightly divergent from parallel, sloping downward toward the nose from the plane of the top skull. In profile, the lower plane curves gradually from the nose to the throat. Jaws are level. Nose-Large, flesh and well developed with open nostrils. Set on as an extension of the muzzle. Color: solid: light to dark brown or black as befits the color of the coat. Lips-Close fitting, clean, and sufficiently deep to cover the lower jaw without being pendulous. Bite-Scissors or level, with complete dentition. Scissors preferred.
Neck, Topline, Body: Neck-Long, strong, muscular, slightly arched, clean, and well set into shoulders. Topline-The neck slopes smoothly into the withers; the back is level, well muscled, firm and strong; the croup is short and gently rounded. Body-The prosternum is prominent and well fleshed. The depth of chest is roughly equal to the length of the front leg from elbow to ground. The rib cage is long and extending into a short loin. Ribs are oval, well sprung and curve gently into a firm loin. Loin-Short, strong, and deep, with little or no tuck up. Tail-Set on low, in line with the croup, just below the level of the back with a natural downward inclination. Docked tails preferred, natural tails are allowed. The tail whether docked or natural length should be in balance with the overall dog.
Forequarters: Shoulders blades are oblique and sloping. The upper arm is closed-set; elbows are directly below the withers, and turn neither in nor out. Bone is flat. Forelegs are straight and well boned to the feet. Pasterns are moderately sloping but strong. Dewclaws may be removed. Feet face forward and are large, rounded, and webbed, with strong, well arched relatively tight toes and thick pads.
Hindquarters: Strong and driving; stifles and hocks only moderately bent. Hocks well let down; pasterns relatively short, strong and parallel when viewed from the rear. Hips moderately broad and muscular; upper thigh broad and powerful; second thigh well muscled. Bone corresponds to that of the forelegs. No dewclaws.
Coat: Single; moderately long; flat or slightly wavy; silky; and glossy; dense and water- repellent. Moderate setter-like feathering adorns the chest, underbody, backs of the legs, buttocks, and may also be present on the second thigh and underside of the tail. Pasterns have clean outlines to the ground. There is short, soft hair between the toes. Overabundance of coat, or cottony texture, impractical for field work should be penalized. Trimming is limited to that which enhances the natural appearance of the dog. Amount of coat or absence of coat should not be faulted as much as structural faults.
Color: Black, liver, golden liver or shades thereof, in any intensity (dark or light); either self- colored or bi-colored. Bi-colored dogs must be roaned and/or ticked in white areas. Tan points are acceptable on the aforementioned colors and are the same as any normally tan pointed breed. White is allowed on the throat, chest, and/or brisket, and may be clear, ticked, or roaned on a self color dog.
Gait: The head is carried alertly, neither so high nor so low as to impede motion or stride. There is good forward reach that begins in the shoulder, coupled with strong drive from the rear, giving the characteristic effortless, long, low majestic stride. When viewed from front and/or rear elbows and hocks move parallel. The legs move straight, with slight convergence at increased speed. When moving, the tail is carried inclined slightly downward or level with the back, and with a wagging motion. Tail carried above the back is incorrect. Side movement is straight and clean, without energy wasting motions. Overreaching and single tracking are incorrect. The Field Spaniel should be shown at its own natural speed in an endurance trot, preferably on a loose lead, in order to evaluate its movement.
Temperament: Unusually docile, sensitive, fun-loving, independent and intelligent, with a great affinity for human companionship. They may be somewhat reserved in initial meetings. Any display of shyness, fear, or aggression is to be severely penalized.